Looking for the perfect Australian Shiraz to get you from solstice to summer?

While the Barossa and McLaren Vale are often seen as the go-to regions for warming winter reds, a boutique Clare Valley producer is now turning up the heat, with its award winning cool climate Shiraz.

The 2014 Penna Lane Shiraz – sourced from the beautiful Skilly Valley running between Clare’s Sevenhill and Penwortham – took out the trophy for best Shiraz in show at this month’s 2016 Australian and New Zealand Boutique Wine Show.

Peter Treloar, Managing Director of the winery said that the win has been quite a coup for the small producer – which is best known for its refreshing Clare Valley Rieslings.

“We’re pretty chuffed with the win to be honest, we spend a lot of time drinking our own Shiraz, so we know it’s good,” he laughed. “But to be recognised by our peers in such a prestigious wine show is pretty exciting for us.”

“It’s also particularly encouraging to be chosen as the top Shiraz in show – it’s not often a wine from the Clare Valley is recognised in this category, so it’s quite an honour.” 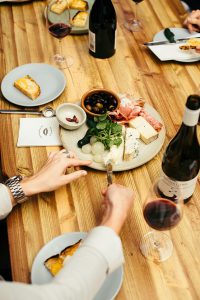 According to the Boutique Wine Show’s Chairman and judge, Huon Hooke, the 2014 Penna Lane Shiraz was the clear winner at this year’s tasting table – with an elegance of style that put it ahead of the 200 Shiraz wines entered in this year’s event.

“This year we received more than 900 entries, 200 of which were Shiraz, so it’s by far the most competitive trophy of the show, and always has been,” Huon said.

“Nine gold medals were awarded in the Shiraz class, and a trophy awarded to the top gold medalist.”

The Australian and New Zealand Boutique Wine Show has been running for 21 years, and as Chairman since its inception Huon Hooke said that the show is about celebrating the diversity of wine styles seen in Australia and New Zealand.

And while the Show only accepts entries from wineries that crush 250 tonnes of grapes or less – this means that the vast majority (almost 90%) of Australian and New Zealand producers are eligible.

“It’s the trophy to win if you want to be seen as a respected small producer,” Huon said.

“We saw a very high standard of lovely elegant wines this year, so it’s a hell of a result for Peter and the Penna Lane brand.

“It’s fairly rare for a Shiraz from the Clare Valley to win, usually this category is dominated by Barossa and McLaren Vale but we were impressed with its elegance and versatility.”

Huon said the 2014 Penna Lane Shiraz was a good “each way style” for drinking now or cellaring.

“It’s quite a spicy wine, which we all really liked, it had great texture and weight and was a very good medium to full-bodied Shiraz,” he added.

“It wasn’t too tannic or acidic and had wonderful structure, so it’s a great buy, to drink now or to keep for later – it’s also really good value.

“The 2014 vintage was a standout for almost every region, so to be this year’s Shiraz trophy winner is really saying something.”